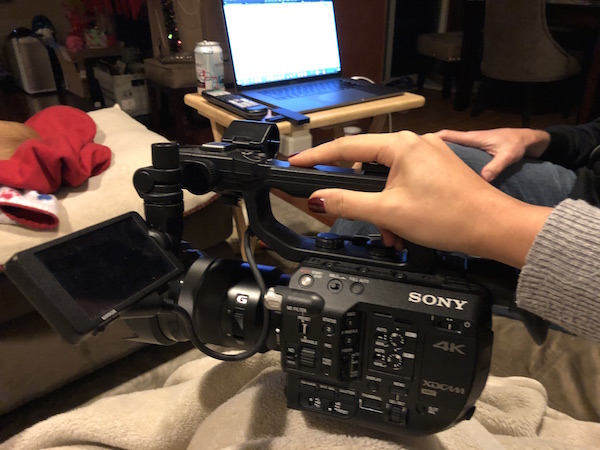 Yesterday, I got a crash course in filmmaking from my friend, Christian, who was the director for the Four Points Film Project I wrote about. A film major, Christian has done gigs ranging from filming weddings to making corporate videos, but his real passion lies in narrative filmmaking.

We did an overview of the entire filmmaking process, with some deeper dives on some of the technical aspects, like choosing lenses and using the camera. In this post, I’ll go through the topics we covered, highlighting some of the learnings that were particularly interesting.

Before we dove into the production process, we went over the three overarching types of film projects Christian has worked on:

It was interesting to look at these three types of projects because there are different considerations and requirements for each type.

Event filming is more of a documentary style. It’s important to know the event timeline and important aspects you should capture, but you don’t have much control over the action.

The content of corporate videos can range, but the big thing here is that you are working with a client. That means there is a whole phase of understanding the client goals, scoping the project and managing expectations. The thing that really stood out to me here is the importance of being very specific with the client what you will and will not deliver.

Narrative film — depending on the level of quality you’re going for — can be the most complex with regards to roles and steps in the process. But this is where, at least as a director, you can really have the most creative control.

When I put video producer on my list of careers, I was thinking more about corporate videos, working in-house, as a freelance video producer or as part of a production company. I’ve also been focusing on video when talking about my exploration of being a content creator, which could include a lot of elements of the narrative filmmaking process, depending on the style of videos I’m going for.

We looked at pre-production, mostly from a narrative film point of view. There’s everything from securing your talent and crew to preparing your equipment.

A few things that really stood out to me:

First, it’s important to start with scheduling. With a narrative film, you’ll want to break down your script by scene locations, actors needed in each scene, props required, etc. Then, you can schedule your shoot accordingly – e.g. grouping your scenes that take place in a certain location and shooting those back-to-back.

From a director’s standpoint, an important step is storyboarding and getting your shot list. Storyboards are a good way of explaining your vision of the film to stakeholders, such as a client or producer. And the shot list is essential in running a smooth shooting schedule and making sure you don’t miss any shots. I found this good example of a storyboard:

Here’s where I got a deeper understanding of all the technical aspects of a film shoot.

First, I learned all about lenses and, boy, is there a lot to learn! There are a number of settings on a lens that will affect the image you capture. Starting with the size of the lens, the higher the size, the more close-up you’ll be to the subject of your shot and the more out-of-focus your background will be.

We see the whole dog (a very cute pup named Lily) and the blanket she lies on in focus. Then in the background, we get the TV on its console and the wall with the pictures, all a bit out-of-focus.

Here’s a shot with the camera in about the same location, but using a 50mm lens:

In this shot, we’re much closer up on Lily, only seeing part of her body and the blanket. And in the background, we’ve only captured a corner of the TV console, which is a lot blurrier than in the 24mm shot.

There were other things on the lens, like the f-stop, which affect the image you capture but I won’t get too much into that.

We also went over lighting — when to take advantage of environmental light versus bringing in your own light. Natural sunlight vs. indoor light. How to control the light with things like reflectors. One cool thing is that a lot of modern film lights will have knobs that let you adjust the temperature of the light to replicate either indoor light or sunlight, using the same device.

Finally, we looked at sound. For corporate videos you might use a lavalier for something like an interview. But for narrative, you’ll be using a shotgun microphone. When filming, it’s always a good idea to rehearse a scene to understand the volume of the dialogue and if levels will need to be adjusted mid-scene (e.g. if someone is going to yell).

And a good rule of thumb for scheduling — 1 page of dialogue is typically about 1 minute of film and 1 hour to shoot.

We didn’t go to deep into post-production because we will have a follow-up session all about editing.

One really interesting thing we went over is color grading. When you are shooting your video, there is a setting called Log recording, which will make the image a bit flatter and more desaturated when filming but will give you more flexibility to adjust the colors during the editing process.

Here’s an example of some color grading we did:

We also covered things like cleaning up audio levels and adding music. One important thing in the post-production process is thinking about where your video is most likely to be viewed — YouTube, on a blu-ray/dvd, in a theater, etc. This will have a huge effect on how you export your final product.

Putting these learnings into action

One big thing that became clear during this lesson — filmmaking can be expensive! Ok, I know you are all exclaiming a collective “duh!” at me, but I don’t think I really understood the magnitude of how much equipment you’d need and the cost of that!

But even without the most advanced equipment, I can still try out a lot of these learnings, particularly around the planning process and basic production elements.

As I mentioned in my previous post, I will be doing a couple test videos around topics that I could see myself having a YouTube channel around. I can start by plotting out the script for those videos and thinking about the shots I want to get.

I also have a short narrative film I’ve written, and I’ll start creating a shot list for that and maybe even try my hand at storyboarding!

Big thanks to my friend, Christian, for taking the time to be a pro bono film teacher. You can check out his work here.

Unexpected Changes
May 17, 2019
“Oh, I Can Do That”: Interview with Tasi Alabastro
September 6, 2019
Recovering a Sense of Safety
July 14, 2020
Subscribe
3 Comments
Oldest
Newest Most Voted
Inline Feedbacks
View all comments

[…] I’ve talked about video a lot on this blog. From getting a crash course on the medium to working on some film sets. And even the many times I’ve attempted (and failed) […]

[…] sprinted out the gate with a crash course in filmmaking and naively dove into the deep-end, trying to produce a pretty complicated and time-intensive […]