Well, we’ve survived a week of ‘sheltering in place’, and as I wrote about in my previous blog post, I’ve used this housebound time to explore new creative projects and skills.

About a week ago, a friend shared an article about a Chrome browser extension — Netflix Party — that allows people from different locations to all watch the same Netflix title together in real time and pipe in with their own live commentary through a chat thread that appears on the side of the screen. Since then, I’ve seen a number of articles floating around about the Netflix Party extension, as it’s the perfect tool for this period of quarantine — a way to stay connected with friends and family virtually, when you can’t physically.

For me, I immediately thought about how Netflix Party could be a new and interesting way to engage and build the Bring Your Own Movie audience. As I mentioned in my last post, one of my creative goals during this period of quarantine was to do more with the podcast social media channels, and this was a great opportunity to try something new.

This was also a great opportunity to see how quickly I could put something together. Facebook used to have an internal tenet: “Move fast and break things.” While they may have shed the latter part of that motto, employees were still encouraged to move fast. But I often had a difficult time moving at the speed they wanted, as I always wanted to develop a well thought-out, perfect product, while teams were really just looking for the minimal viable product.

As it became clear that people were going to be spending more and more time at home, looking for things to alleviate their boredom, this was a time when that speed was paramount. The very day I saw the article, I was texting the BYOM crew about hosting a watch party with the tool and the next day we were promoting the event. A lot of that speed relied on me just making a call on things, not waiting for 100% consensus and not necessarily having the whole thing figured out before we announced the watch party.

There is such a thing as moving too fast, and before we announced our watch party, I wanted to see the Netflix Party tool in action and make sure everything worked smoothly, with no lag. So I enlisted a friend to help me test. Once I confirmed it worked great, we were ready to announce the watch party!

Oh wait, but what movie would we watch?

That could have been a decision-by-committee kind of thing, with a lot of back and forth among the BYOM team, delaying the announcement of the watch party. Or we could use this as an opportunity to engage with our audience — why not ask our fans for movie suggestions?

And that’s exactly what we did. We received a lot of suggestions. It was a great way to get the conversation going. In the end, I just made an executive decision on the film from among the options. We announced the film the next day and started promotion with social media posts and a Facebook event.

I also read up on the reviews to see if there were any common issues people were experiencing with Netflix Party. It seemed like the tool did work well as long as people were already signed into Netflix in their Chrome browser. I made a note to include that in our instructions to people.

Movie was selected. Instructions were given. We were ready for our watch party on Friday.

Hey, how about a livestream?

Ok, you know me — I can’t do anything small. I was inspired by a number of my friends that have been doing livestreams during this time. They got quite a lot of comments throughout the video and, once again, I thought this might be a really great way to engage our own fans.

At first, I thought simple — Ryan and I would do a watch party pre-show through Facebook Live (we get the most engagement on Facebook compared to Instagram and Twitter). It could be similar to our podcast, where we would talk about the film, maybe do a little trivia and ask for our viewers to pipe in with their own thoughts.

But I thought about what a shame it was that we couldn’t have the other two hosts included on the livestream to make it even more like our podcast. This is where, since I had some free time, I thought that maybe we wouldn’t just settle for the minimal viable product.

It turns out Facebook Live used to have a feature where you could bring multiple presenters into the same livestream; unfortunately, they had sunsetted the feature last November. However, there were a number of third-party tools that still let you do that. After a bit of research, I decided to use Streamyard, as there was a free membership level that allowed us to bring in three hosts.

I worked with the BYOM crew to brainstorm topics for the livestream. We tested out Streamyard to make sure it worked. And we were ready to go.

Putting my audio skills to the test

We promoted the watch party all week through our social media channels. But we are a podcast after all, so it only seemed right to record an announcement about the watch party and pre-show livestream and publish it to our feed.

This was a great opportunity to practice recording and editing audio. I wrote a script, recorded a few takes, popped the audio file into GarageBand to edit, and uploaded it to Libsyn.

Well, Friday came around … and everything went wonderfully!

The livestream was fun, looked really professional and got a lot of fans engaged. The watch party tool worked smoothly and the chat thread was lively and funny. We got great feedback after the event.

It was amazing how with one event, I was able to touch on four of the creative projects I wanted to accomplish during this quarantine.

I am definitely looking forward to hosting additional online events for the podcast — more watch parties, virtual movie trivia nights, podcast live shows? It’s a great way for us to engage with our fans, and hopefully will result in even more downloads of the podcast. 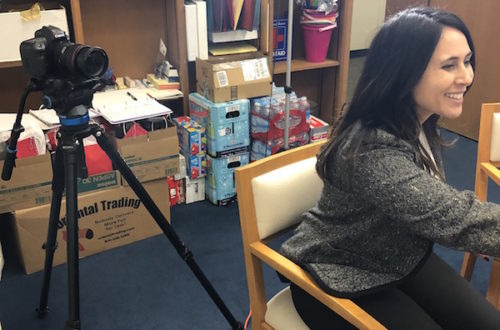 The Other Side of the Camera
December 18, 2018
Subscribe
0 Comments
Inline Feedbacks
View all comments
wpDiscuz
0
0
Would love your thoughts, please comment.x
()
x
| Reply